Menu
Home > Pests > Bugs > What Is the Difference Between Centipedes and Millipedes? 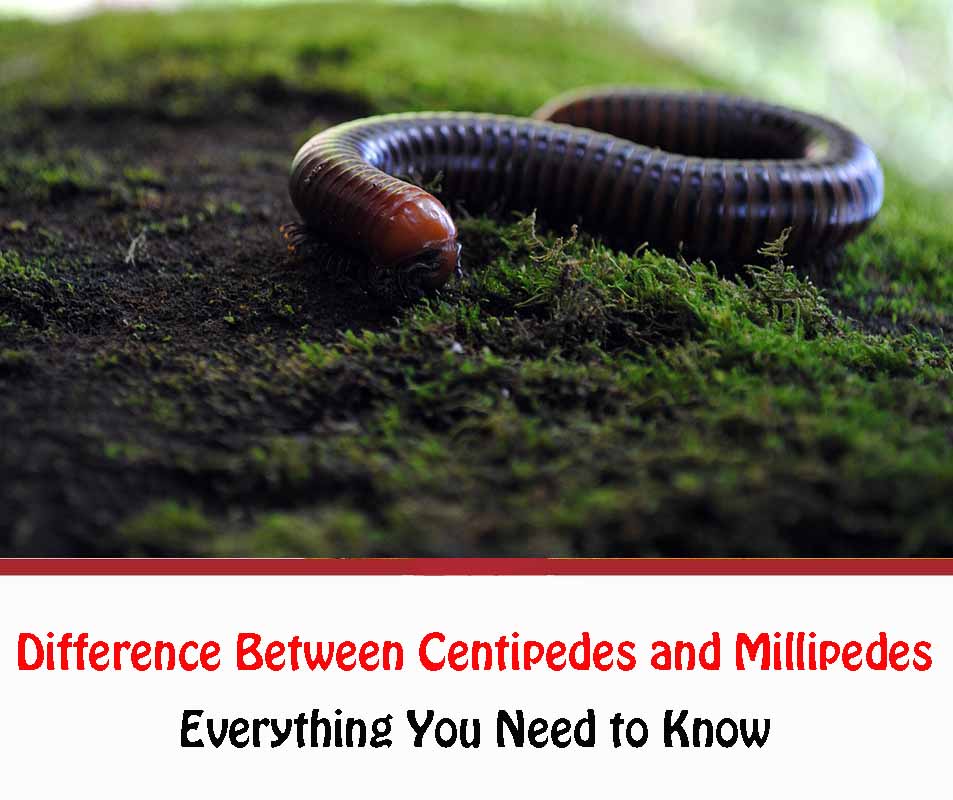 You saw some creature wiggle past you. You missed its characteristics. But you have seen this creature before. It has many legs, segments, and a long body. What is it; a millipede or centipede? How do you differentiate between the two? Both these creatures have bodies divided into segments. It is hard to differentiate between the two quickly. Millipede’s bodies have segments directly under their body, each carrying two sets of legs, while centipedes have one set of legs for the segment on the body’s side. Centipedes kill and feed on insects with the help of their venom, while millipedes eat decomposed plants. A millipede’s body is round, while centipedes have flat bodies. When faced with threats, millipedes spiral and release secretions that smell badly. Centipedes bite or run away. Moreover, their bite is harmless to humans.

Difference Between Millipedes and Centipedes 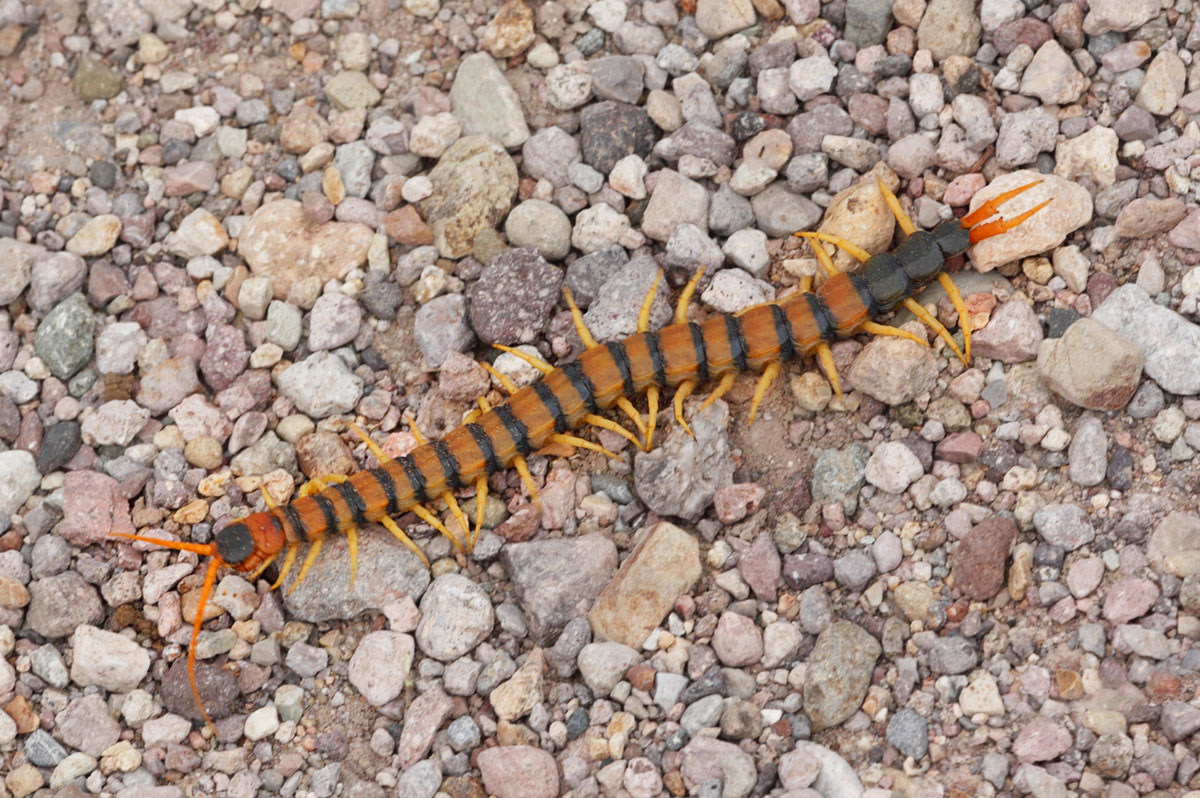 Below we discuss these differences between centipedes and millipedes, as well as many more in detail.

Centipedes are carnivores that kill their prey with their venom, while millipedes are detritivores. These millipedes consume dead and decaying organic matter that may include roots or leaves. They carry forth microbial decomposition and contribute to the soil nutrient cycle. The venomous first segment legs of centipedes are known as maxillipeds that they use to attack prey and in self-defense. While they don’t sting, they use secretions to save themselves from predators. The secretions ooze out of their defensive segmental glands. Millipedes usually curl up out of self-defense. A centipede’s bite is less harmful to humans, though.

Centipedes belong to the Chilopod class. There exist around 8000 species of centipedes. Their name indicates 100 legs; however, they may have between 30 to 354 legs. They usually have odd-numbered pairs of legs.

Millipedes belong to class diplopods. There are 12000 such species. Millipedes mean a thousand legs, but they may have 750 legs.

Centipedes grow in length by 1 to 12 inches based on the species to which they belong. These creatures have long antennae. They are carnivores and have large jaws, which they use to kill and paralyze the prey. They are rigid arthropods and have laterally positioned spiracles that may have valves. Unlike millipedes, they move very fast, using their legs to tread forward. Their single genital opening is at the posterior end. Female centipedes usually absorb the sperm on finding it.

Some centipedes are venomous, while others may not be. Millipedes, which are the front legs of centipedes, contain venom glands that help to inject the prey with venom, thereby killing it. A centipede may bite humans, causing allergic reactions like a bee sting. Larger centipedes leave a more painful bite. Small kids that are allergic to these bites can have strong reactions.

Three species of centipedes amongst many include,

House centipedes are less harmful. They eat up spiders and insects inside the house and can be helpful. These creatures have long legs.

Amazonian Giant Centipedes exist more in South America. They are amongst the largest centipedes. These aggressive centipedes can grow up to 1 foot.

Texas redheaded centipedes have a redhead and grow up to 8 inches. They exist in Texas, southern states, and some parts of Mexico. Their head is red, their legs bright yellow, and their body black. Predators may stay away from their due to these color patterns.

Also Read: How to Get Rid of Millipedes Naturally

They have four legs per segment, while centipedes have 2 legs per body segment. Millipedes lack powerful jaws, and these jaws are devoid of venom. Their antennas are short. Millipedes feed on decayed organic matter like compost, leaves, and roots. Their body is flexible and has ventrally positioned spiracles with no valves. They move slowly in a wave-like fashion. Their single genital opening is at the anterior end. Male millipedes deposit the sperm within the female while mating.

Millipedes are never venomous, and however, because people confuse them with centipedes, they have a bad reputation. When attacked, these millipedes curl into ball shape instead of biting or sting the attacker. Its defensive gland secretes a smelly liquid when attacked. This liquid affects the eye and skin as well as makes the skin smell. Most people can be allergic to these liquid secretions. Therefore, always wash your hands after handling a millipede. 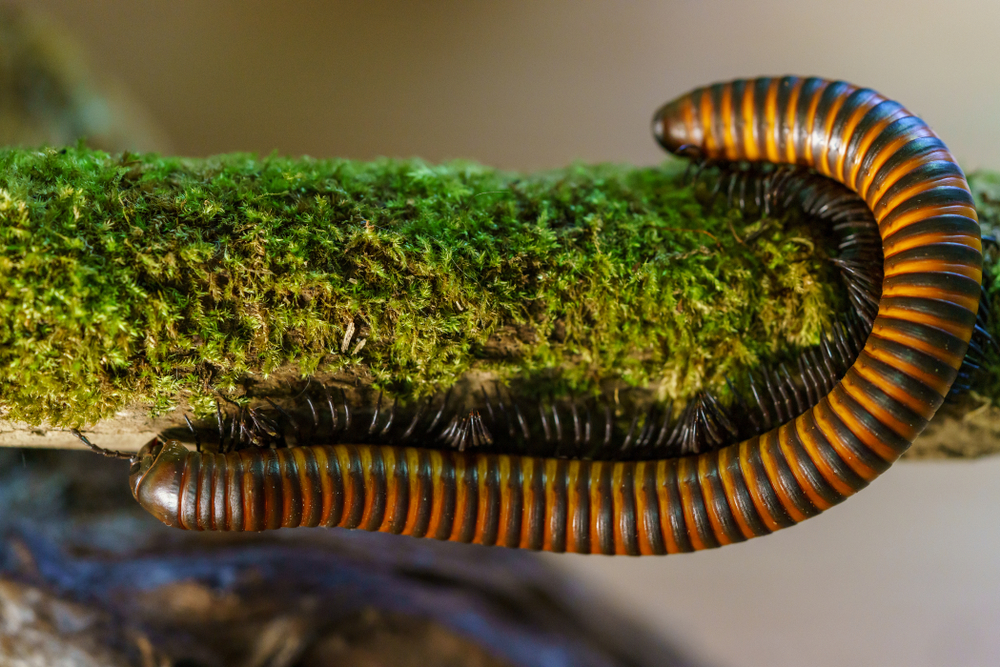 The most common millipede types include:

Giant African Millipedes are about 15 inches and 3 inches around. Each of them may have around 200 to 300 legs. House owners keep them as pets.

Cave millipedes are blind and pale. These creatures adapt to their environments easily and prefer cool and moist places. Some of them live in the caves of the US, and each of them belonging to a different cave, vary in form and shape.

Shocking Pink Dragon Millipedes uses its bright colors, beauty, and spines to ward off predators, indicating that it is toxic. Its toxin gives it an almond-like smell.