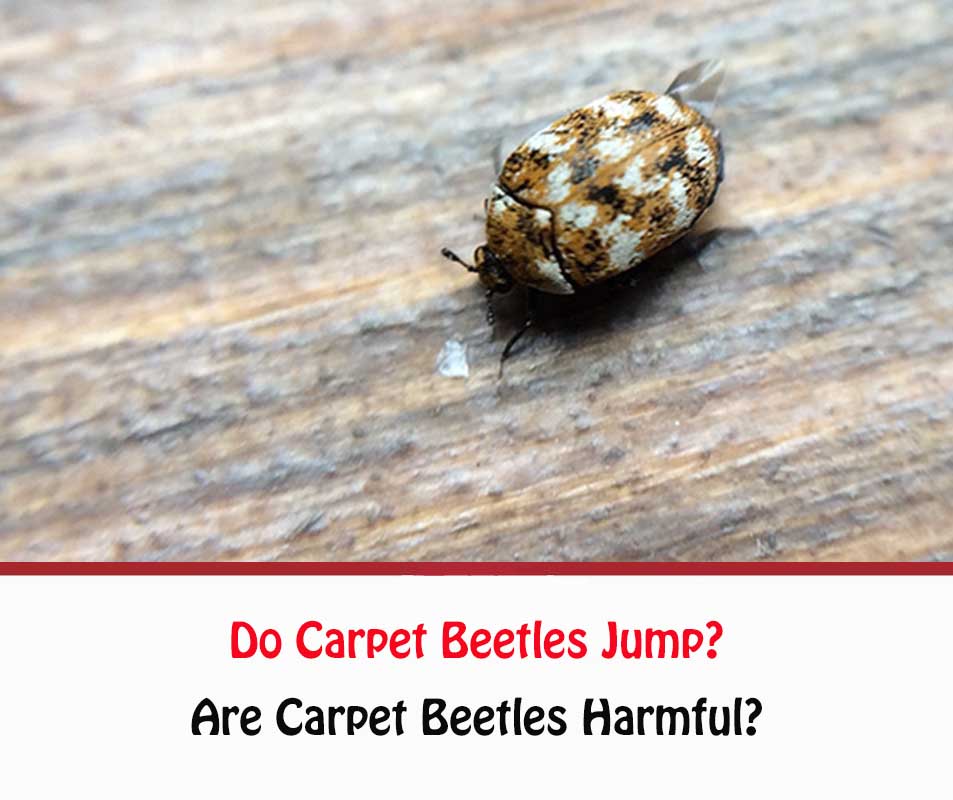 Adult carpet beetles are small, oval, hard-shell insects with brown or dark-black bodies, sometimes with yellow or white spots. The larvae are hairy and are 1/2 inch long. The tufts of hair are black or reddish-brown.

Carpet beetles are tiny insects that quickly become common pests. This pest can cause serious domestic damage, and to combat it is necessary to know its characteristics.

People often ask themselves many questions to learn how to identify and eliminate them. It is essential to know if carpet beetles jump to apply the appropriate method.

Knowing what it looks like and whether it flies or jumps or crawls will give many advantages when planning prevention or control.

Carpet beetles do not jump. These undergo different stages of development that allow them to crawl while it is a larva or caterpillar. When it reaches the adult stage, a pair of wings appear that then allow it to fly.

They generally inhabit plants and flowers in the adult stage, and when they are in the caterpillar stage, they host and feed on old furniture and dry food.

Knowing this insect’s habits and behavior is the only thing that will allow you to control the pest.

How Do They Move From Space To Space?

As has already been said on other occasions, carpet beetles in their different stages develop differently. These insects transform in a short time and evolve to feed according to their phase.

Many wonders, like other insects, if carpet beetles jump? The truth is that they don’t jump. Instead of jumping, these tiny insects hatch fifteen days after the female lays her eggs, and from that moment on, it is a caterpillar that shrinks to the touch.

Like other insects, it transforms, and when it reaches adulthood, it looks oval with a range of bright colors, and its wings appear.

When it is in the caterpillar stage, it moves to other places while crawling, but when it becomes an adult, its wings allow it to fly to move from one place to another.

This insect usually lives in places in the open air, but what forces it to move are the right conditions to feed and reproduce, which depending on the season, can be inside the houses.

How Do Carpet Beetles Spread?

Carpet beetles need to be found in a food source such as textile fibers or wooden furniture and in carpets to reproduce. Like most insects, they reproduce through eggs.

Carpet beetles spread rapidly because all they need is for an adult to lay their eggs in a food source. In just about two weeks, they have transformed into the larvae of carpet beetles.

They begin to feed and dig while leaving remains of feces and skin particles. While they feed, they spread quickly and contaminate objects where they are hidden.

In three weeks to a month, a house may be all plagued, and it is more difficult to exterminate it with chemicals or even control it naturally. Therefore, preventive cleaning maintenance is recommended.