Menu
Home > Pet Problems > Fishes > How To Get Rid Of Algae 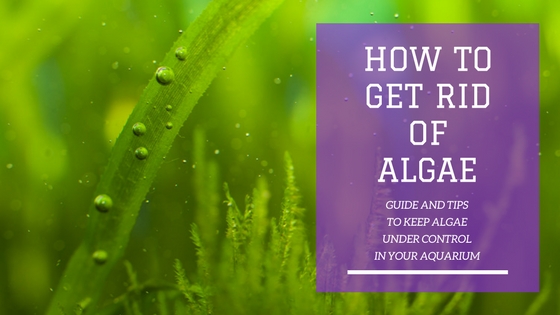 Best Ways To Rid Of Algae

Will you love seeing gallons of green algae collected in your pond or in an aquarium at your home? Won’t it be irritating? Well, I feel it is the most unsatisfying thing. The water body is a part of the ecosystem and every part of ecosystem has its own importance and work, whether it’s an abiotic or biotic component. For example, the waste products produced by the aquatic animals say fishes are decomposed by the decomposers that include various bacterial bodies. Thus, the nutrients produced by the decomposition of biological waste are then used by the aquatic plans that will, in turn, provide the fishes and other aquatic animals with oxygen. Hence completing the cycle and maintain a healthy pond. But the algal growth is very common and it intends to disturb the equilibrium of the water system. The algae that commonly grow in ponds are:

Why it is important to remove the algae?

Due to the algal growth, most of the nutrients are consumed by the algae as a result of which it grows quickly, and the aquatic plants don’t get enough nutrients to grow and they will not be able to develop properly. Therefore, to prevent the restriction of plant growth it is necessary to keep the pond or your aquarium healthy by eradicating the algae.

What are the best ways to get rid of algae?

I think this point doesn’t need that much explanation after the above discussion. As I explained above that excess of the nutrients are absorbed by the fishes than you are unintentionally feeding the algae or if let’s say your fishes eat more than they will produce more biological waste which will work as a perfect top dressing for algae to grow.

The aspect of changing the water regularly is very crucial in order to remove the biological waste from water and hence preventing its consumption by algae in the form of fertilizer. You can take an estimate as more rise in the level of waste helps in boosting the growth of algae.

One can use the algae pads in case of aquariums. These pads are harsh enough to get rid of unwanted algae. One should use the algal pad in a circular motion, doing this help to clear away the algae from your fish tank and don’t worry it will not put scratches on the glass of the aquarium. It is one of the best and effective ways to eliminate algae.

In order to wipe out the algae completely from the tank, one should take out all the decorative rocks and shrub from the tank and clean them using hot water and lightly scrubbing with your hands. It will help to remove any deposition of algae on the roots of rocks or in the gravel.

As we all know that algae are photosynthetic in nature. They carry out all their life processes in the presence of light. Therefore, it is suggested to make sure that you keep your tank away from the direct sunlight and also to keep the lights off during the night. So that it will become difficult for the algae to carry out their life processes without any exposure to light.

These are some of the ways that are helpful in clearing away the algae from your fish tank. But these are not the permanent alternative to the problem of algae but they temporarily help to remove the algae and preventing their growth.

Apart from the above-mentioned ways, if you want to completely root out the algae from the aquarium or the pond then there are various solutions by which one can easily kill the growing algae.

Here I have listed out some of the best alternatives that you can try to kill dogged algae. You can have a glance over all of them below:

There is a little bit of science involved behind this method that when you put barley straw bales into your tank then releases humic acid on its decomposition. This humic acid will further react with the dissolved oxygen in the presence of light and will produce hydrogen peroxide in a small amount. And the hydrogen peroxide will terminate the growth of algae.

Salt is a compound that can be found in anybody kitchen, have you ever wondered what this frequently used compound can actually help you to wipe out the algae from your pond? No? Well, yes it can. For this, around 0.5 kg of non-ionized salt is sufficient to kill the algae from 100 gallons of water. Repeat the process 3 times with an interval gap of 12 hours in between. But after the completion of the process, you need to Brush out the dead algae so that it doesn’t decompose inside the pond or tank.

Apart from these natural alternatives, you can also use some machines that can help to eliminate the algae from the water body system such as

It is a piece of equipment that can easily be mounted on the side of the tank. Water will be pumped in the tank after passing through it and it will not only kill the existing algae but also eliminate other harmful parasites and pathogens that can affect the fishes.

It is one of the same, chemical free and yet the most effective way to kill the algae. This system unit can be used in ponds as well. The unit transmits the ultrasonic sound wave that ruptures the vacuoles present inside the algae. Don’t fret this will not do any harm to your fishes or plants.

Now you don’t need to worry about the problem as you can use any of these methods to solve out your problem.