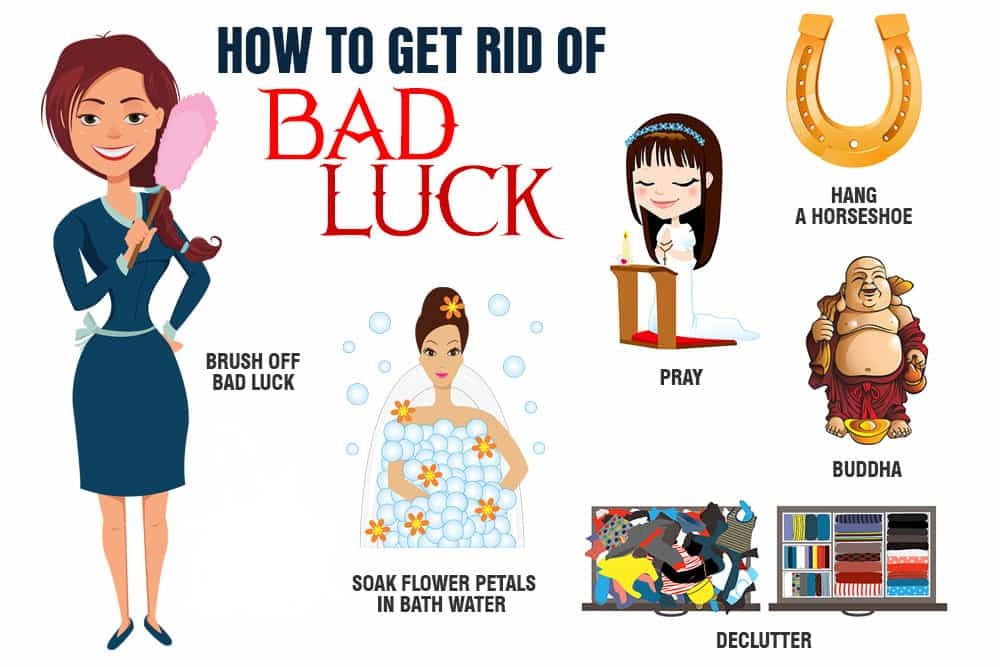 What is bad luck?

Luck is a positive element that brings success, money, gains and happiness into our lives. On the other hand, bad luck is negative, undesirable luck or fortune. At some point in life, we all experience a horrible string of bad luck. But if it keeps recurring, it causes anxiety, depression and other mental health problems.

What can cause bad luck?

This may be due to weak planets, the curses of enemies, and past life bad karma. Negative people around us also create negative energy which manifests bad luck. Bad luck will have an impact on your thinking ability, actions, mental health, competent at doing certain things and your decision-making ability.

Bad luck is a superstition which not only you, but many other people in the world believe and follow with utmost belief. There are many superstitions followed by people across the globe.

A list of signs believed to bring bad luck

Check out below which one you are doing that is causing your bad luck.

Doing any one of the signs listed above invites bad luck. There could be many more we don’t even know that bring bad luck.

If you’ve been dealing with bad things lately in life and awaiting good luck to get on your side, not to worry, fortunately, there are many things that can be done to get rid of bad luck.

How to Gett Rid of Bad Luck

Fortunately, there are many things that can help you get rid of bad luck.

Salt – A pinch of salt can be used to get rid of bad luck. Salt is considered to bring good luck across many cultures in the world. Usually, rock salt or sea salt is used to remove the negative energies around us.

Goldfish – Goldfish are considered to be lucky in different cultures. Keeping the goldfish in a bowl at home or office symbolizes growth, wealth, long life, peace, and prosperity.

Make a donation – Good luck can be earned by doing some positive deeds, the so-called good karma. Good karma will always have a good effect on life.

Horseshoe – The iron horseshoe is considered as a good luck charm in most Western countries and India. Hanging horseshoe is said to ward off the evil eye.

Stones and gems – There are different stones and gems such as agate, garnet, rose quartz, amber, and malachite and citrine help attract good luck and positive energy.

Frogs – Frogs are a symbol of fertility in some cultures. Otherwise, also they are considered as good luck symbols that bring wealth, health, prosperity, and friendship. Mojave people believe that frogs brought fire to humans

Coins – Coins bring luck. So, if you see a penny pick it up and carry it with you in your left pocket or around the neck, you will have luck in your favor.

Ladders – Egyptians consider ladders as lucky symbols. Centuries ago, the Egyptians placed them in their tombs to help dead souls climb the ladder and go towards heaven.

Laughing Buddha – Placing a laughing Buddha towards the door brings good luck and wealth. By rubbing its belly, you can become happier.

Lucky numbers – Numbers, in some cultures, bring luck. For example, number seven is considered lucky in many different cultures and religions.

Dolphins – In Ancient cultures of Greece, Sumer, Egypt, and Rome, dolphins were considered lucky. For Christians and Native Americans, the dolphin is a symbol of protection. In ancient times, the sight of dolphins swimming around the ships of sailors who spent months or even years at sea, was considered as the first sign that the land was near.

Elephants – Placing an elephant picture towards the doorway of a house can bring luck and longevity. According to Feng Shui principles, elephant means good luck and according to Hindu mythology, an elephant is a God, ‘Lord Ganesh – the one with an elephant’s head’, who brings luck. Elephants symbolize wisdom, power, intelligence, and strength.

How to avoid misfortune?

Rather than trying to get rid of bad luck after you fall prey, try to avoid bad luck or negative energy from people in the first place.

And how do we do that?

Good things always happen to those who believe in the best. Luck is something that is created by our thoughts and actions. Believing in one’s own potential and trying to explore new opportunities brings success in life. One should always believe in good fortune and try to turn negative energy into positive energy. Look at the positive side of bad luck, believe that ill fortune is temporary and that it is only to give the best, and make wise decisions and constructive steps to prevent more bad luck in future. You are walking on a path with pebbles, either try to remove those pebbles and walk forward in that route or try taking a different route. But do not end your journey there, or walk back.