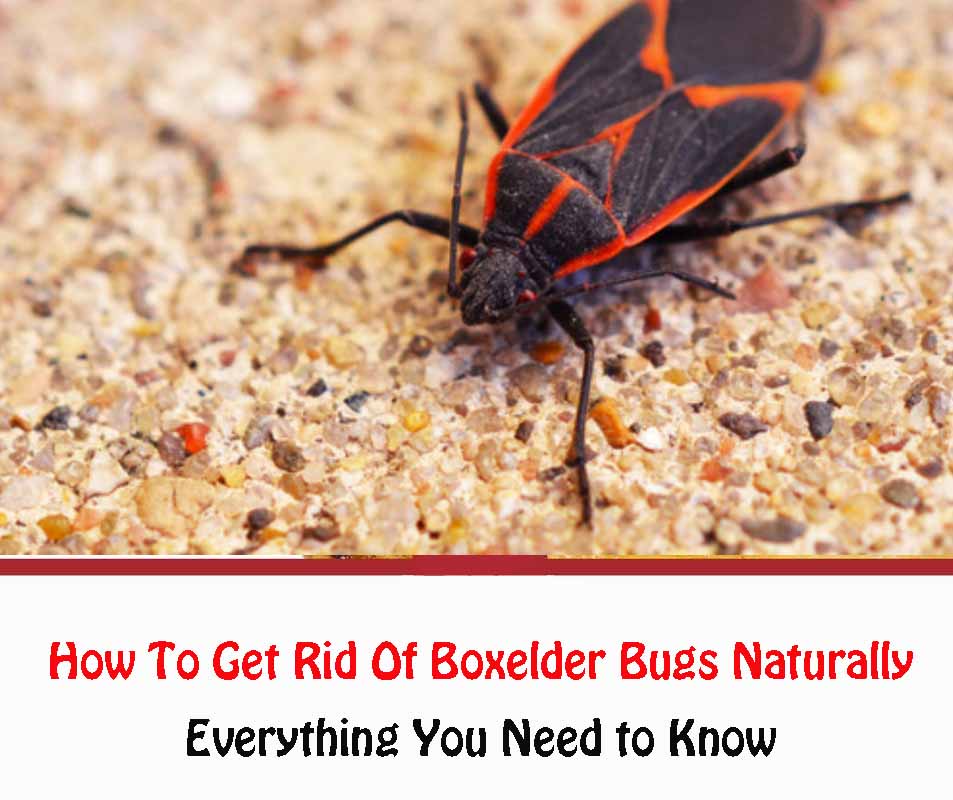 Boxelder insects are red and black, and depending on where you live, these pests can be a problem. These box elder insects are generally not destructive or dangerous; they are annoying when seen in large numbers near your home.

In this guide, we’ll talk about:

Below you can learn a little more about these boxelder bugs and get rid of them naturally.

What are boxelder bugs?

Boxelder bugs are insects that can measure 0.5 inches; they are black with red stripes. Their name comes from the fact that they are always seen near the boxelder trees. Although they are native to the states to the west, you can find them in other states and even Canada, where these trees are absent.

They become a problem when they enter your home or garages for the winter. Adult boxelder insects can be about ½ inches long. They are black with orange or red markings, where three stripes are included just behind the head.

These pests’ wings lie flat on their body and overlap each other to form an X; their body is oval and flattened. Young boxelder’s or nymphs can be 1/16 inch long and are bright red when hatched, turning black as they grow. They have six legs and two antennas.

However, they’re able to be eliminated the exact same methods, and all these ways affect both species.

These insects are attracted to warm areas. They will always enter their houses to seek more heat and avoid cold winter temperatures. They seek refuge in holes or cracks in doors, walls, windows, etc.

Where do box elders come from?

The Box elders look for warmer areas during the winter months that is the reason why you find them inside during the cooler seasons.

Box elder bugs do not come into the house without any reason. And they seldom breed within a house but can come inside for protection because of temperature changes.

Box elder bugs can come into the warmer space that is usually found inside, so it is the reason why you might discover them moving around your carpet or walls.

Like other pests, box elder insects come from the open and get inside your house through cracks, sliding doors, dryer vents, doors, ceilings, as well as faucets.

Cracks, Crevices, and also breaks within the base of your home are easy goals for any box elder bug to jump into the home. This’s the case for other pests, and it is the reason why it is important to ensure your house is shielded from pests.

A number of houses might be a little more susceptible to box elder bugs, particularly if the house faces a western or southern direction with lots of the sun. Taller buildings can also be prone to box elders.

The answer is no; these box elder insects feed on plant matter. Americans eat juices found in trees and maples known as box elders.

At what time Do the Box elders Invade? 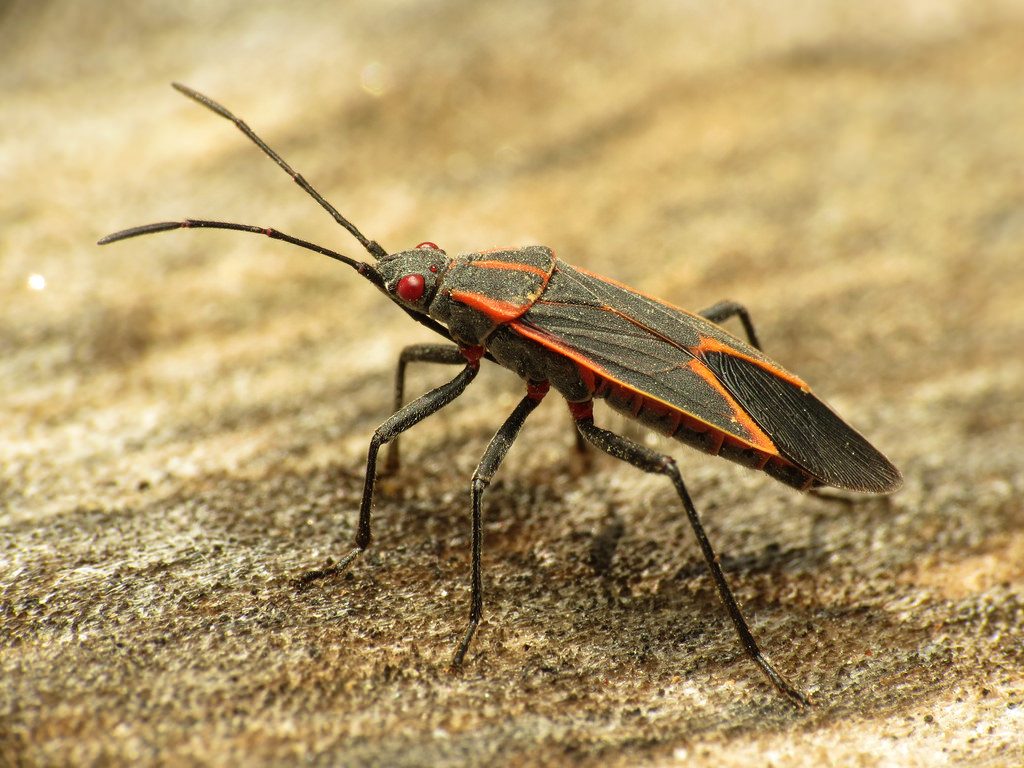 We observe box elder bug infestations primarily during 2 times of every year: The one is when the spring thaw occurs as well as the insects are waking up, along with searching for mates and food. This typically happens between March and May, but you might even see activity in February if it is warm. The insects found a warm nook or perhaps crevasse of a home during the autumn, once they found an area to winter. And they probably sense the climate is warming up so that they can make the way of theirs outside.

The next time folks truly see the bugs is in autumn. If the box elder bugs are especially active and trying to locate a secure shelter for the winter, they are able to be very active. This particular spike of activity is often the biggest of the season, plus is centered from late September to the early November. They have a tendency to be around for a long time, although, and you’ll usually notice them productive actually on bright, sunny days in the winter season, in case they are able to get a warm surface.

Box elder insects will not harm humans. However, they can transmit many diseases because they can take it to another place when they touch something with their mouth.

If you find these insects in large numbers in your home, you should seek to get rid of them as soon as possible. Because when there are many, they are a real problem and are very annoying. Although they do not bite your mouthparts, they can pierce your skin if you handle them, causing irritation and red, mosquito-like spots.

If you crush or crush them roughly, they can produce a strong, slightly unpleasant odor. They can also leave red or orange stains that can discolor the fabric.

It’s the one thing you need to repel for.

Although it is rare, they are able to spread illness by coming into touch with your food and other surfaces that you feel after having a lot of them in the house.

What Do They Eat?

Box elder insects usually feed on seeds from box elder trees. They also eat leaves that are freshly cut, and this can cause discoloration of the foliage. These box elder bugs can also feed on twigs, apple trees, and plum fruit.

They are very fond of aromatic plants and healthy plants, so it is considered a real problem for plants.

If you have maple ash trees nearby, you have these box elder insects in your yard or garden. They are considered a problem. Although they do not damage these trees, they can damage smaller plants.

In the summer, you may not notice these insects because they are in the trees, and that is where they lay their eggs. When cold and winter come, they will make a straight line to look for warm areas.

If you want to get rid of these bugs naturally, you can follow these steps:

You can mix a tablespoon of dish soap with water and put it in a spray bottle. When you observe a large group of boxelder insects, you should spray them with this soapy substance. You will be able to kill several of these insects effectively

You can find them in areas that are warmer where heat is reflected more. When you spray these areas, it will make them move away from that place and prevent them from returning. They secrete pheromones, and with this soapy remedy, you can eliminate it.

You can vacuum them to keep the box elders away. Remember not to squish them because they will release an unpleasant smell that can attract more insects. When you are done vacuuming them, you should throw the bag away from your home to prevent it from coming off.

Remember to clean the areas where you vacuumed with soapy water and thus have greater prevention.

How to Prevent Box elder Bugs

If you want to prevent these annoying insects from entering your home again, you can follow the following tips:

Repairing holes and holes can prevent them from entering your home. You can use a good quality sealant to protect the entrances.

If you have a clean and tidy home, it will be easier for you to see if a box elder bug enters your home. You can clean surfaces with dish soap to keep them away.

Prevention is key for you to get rid of these pests properly. Spray the walls with insecticide to prevent them from entering your home. You can do it once in spring or early summer.

You can begin to collect twigs, leaves, and other plant matter near your home.

Remember not to squish them to prevent an unpleasant smell from coming out, and these dead insects can attract other bugs to your home. Remember to vacuum the areas where these insects are and take the bags away from your home.

Box elder bugs will leave your home by themselves when temperatures rise again; they will look for a way out of your home to leave. They are a pest when they enter your home, and when they leave.

If you want to have a house free of box elder insects, you should follow the following tips, and you can get rid of them naturally. If you do not take the appropriate measures, you will see them in your house every season, looking for warm temperatures in the cold months.

If you notice that you have a very large infestation in your home and you cannot treat them, you should only call specialists in the matter. An experienced and certified pest control professional will be able to fix the problem correctly.

What smell do the box elders hate?

Whole cloves, sage, and lavender are not hard to come by, as bugs hate their scent.

Precisely why are the box elders so dangerous?

Box elder bugs are thought by many individuals being pests, but that is not a totally fair characterization. Of course, they draw the fluids from leaves as well as the growing seeds of maple and box elder trees, and they do not siphon enough out to really hurt the trees.

Where do boxelder insects nest?

Boxelder bugs don’t nest indoors all year long. While overwintering, they don’t reproduce or feed. During warmer months, they make the houses of theirs in boxelder, maple as well as ash trees.

Can anything eat the boxelder bugs?

Rodents, like mice, chipmunks, and rats, are recognized to eat the box elders. Spiders, as well as predacious insects could eat boxelder bugs as well. These birds eat a lot of insects every day, so boxelder bugs might be a delicious treat, particularly if some other food is limited.

How can the boxelder bugs reproduce?

In springtime, the female insects can lay eggs in the crevices and cracks of the boxelder tree’s bark, as well as the nymphs hatch in a short time. The nymphs grow bigger and develop into adults in the summer. Then, they mate as well as lay eggs which hatch into the nymphs of another generation.

At what temperature do the box elders die?

And the boxelder bugs along with other overwintering insects are searching for winter lodging where temps will remain comfortably between forty and fifty degrees Fahrenheit. This’s hot adequate to hibernate, but cold enough they do not expend all their saved energy and die during cold weather.

The box elders feed on the growing seeds, flowers, and leaves of the female boxelder and maple trees. And Boxelders are harmless; they don’t bite, don’t feed fabric, saved foods, pets, or wood, and they won’t lay their eggs in the home and multiply there.