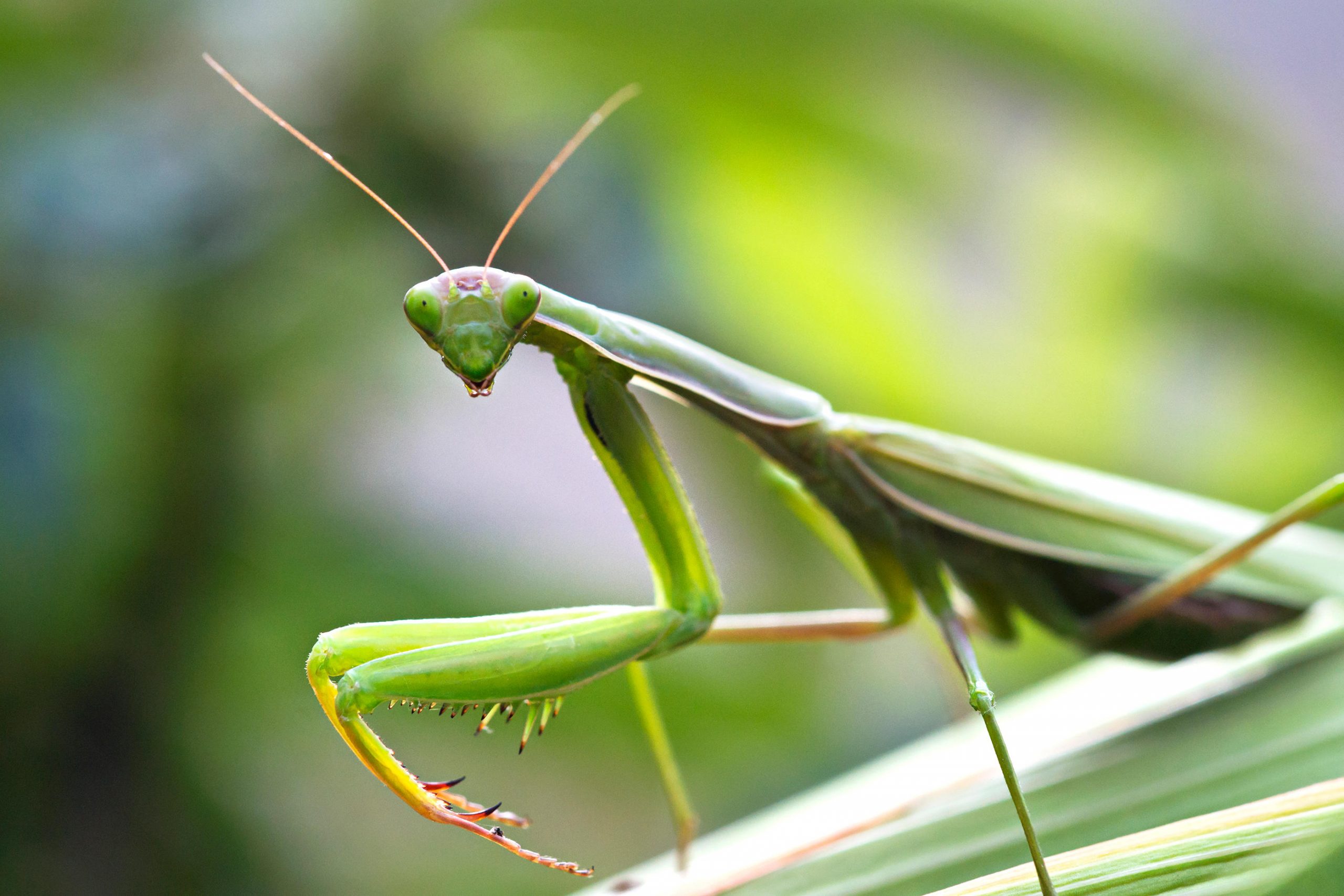 One of the most common questions that arise is how to get rid of praying mantis in your house naturally.

Praying mantids are a type of insect, and because they eat other insects, they can be beneficial to have around.

However, if you want them gone or don’t like them, there are a few ways to do it!

What is a Praying Mantis?

Praying Mantis is an insect that belongs to the Mantidae genus.

Praying Mantis are members of the order Dictyoptera and suborder Mantodea along with their cousins like grasshoppers, locusts, and cockroaches.

Praying Mantids were initially found in North Africa, Europe, Asia, but because of their wings, they have now migrated to various places around the globe like Australia and USA.

Praying Mantis species vary in size from as small as a thumbnail to as large as seven inches depending upon the environmental conditions where it has grown up.

Praying Mantis usually grow to a size of about two inches long and have an elongated body which makes them easy to identify.

Praying Mantids have triangular-shaped heads with large eyes on the extreme sides.

During their last molting cycle, Praying Mantis’ color palette is designed as such that they blend in with their surrounding environment.

Why do praying mantis appears?

There are several reasons why Praying Mantis might appear in your house.

Praying Mantids are always on the lookout for food, and if you have plants indoors, they will be attracted to them.

They can also enter inside looking for shelter during winter months or when it is raining outside.

If Praying Mantis appears in your home, it may not be cause for alarm, but it is important to take steps to get rid of them if they are causing a problem.

Another reason Praying Mantis might appear is that they are seeking a mate.

Praying Mantids are known to be aggressive during the mating season, and if one finds its way into your house, it may take an interest in any other insects or spiders you have around.

Praying mantis is insects in the order Mantodea. Praying mantises may be found across the world, with over 2000 species described. However, new species continue to be discovered on a regular basis, and it is estimated that there may be up to 4000 species worldwide.

This bizarre insect disguises itself as either leaves or flowers for camouflage purposes to avoid being eaten. The Praying Mantis has powerful front legs, which it uses to catch its prey.

There are several types of praying mantis, some of the most common include:

The praying mantis is an interesting creature and makes a great addition to any garden.

If you are having problems with these insects in your house, there are ways to get rid of them naturally without using harmful pesticides.

Praying mantises can be beneficial to have around as they help control the population of other pests.

What Do Praying Mantids Eat?

Praying mantids eat a variety of prey, including other insects and sometimes spiders.

Praying mantids are considered helpful to farmers and gardeners because they eat pests naturally.

However, when it comes to eating each other, these insects have no boundaries- any insect is fair game!

Praying mantises are predators, which means they hunt and eat other insects.

Praying mantises have to be able to catch their prey in order to survive, so you won’t find them chasing down humans or pets.

The blades on its legs can inflict minor wounds if the praying mantis is handled roughly but it isn’t a serious threat to humans.

Praying mantises are also cannibalistic so if you have a praying mantis as a pet, it is best to keep other small insects in the cage with it as food.

Insects that invade our homes can be annoying and destructive, but thankfully we have praying mantises to help us out.

An adult mantis can eat 25 flies in one day, making them an asset when it comes to battling other pests.

When do Praying Mantis Come Out? 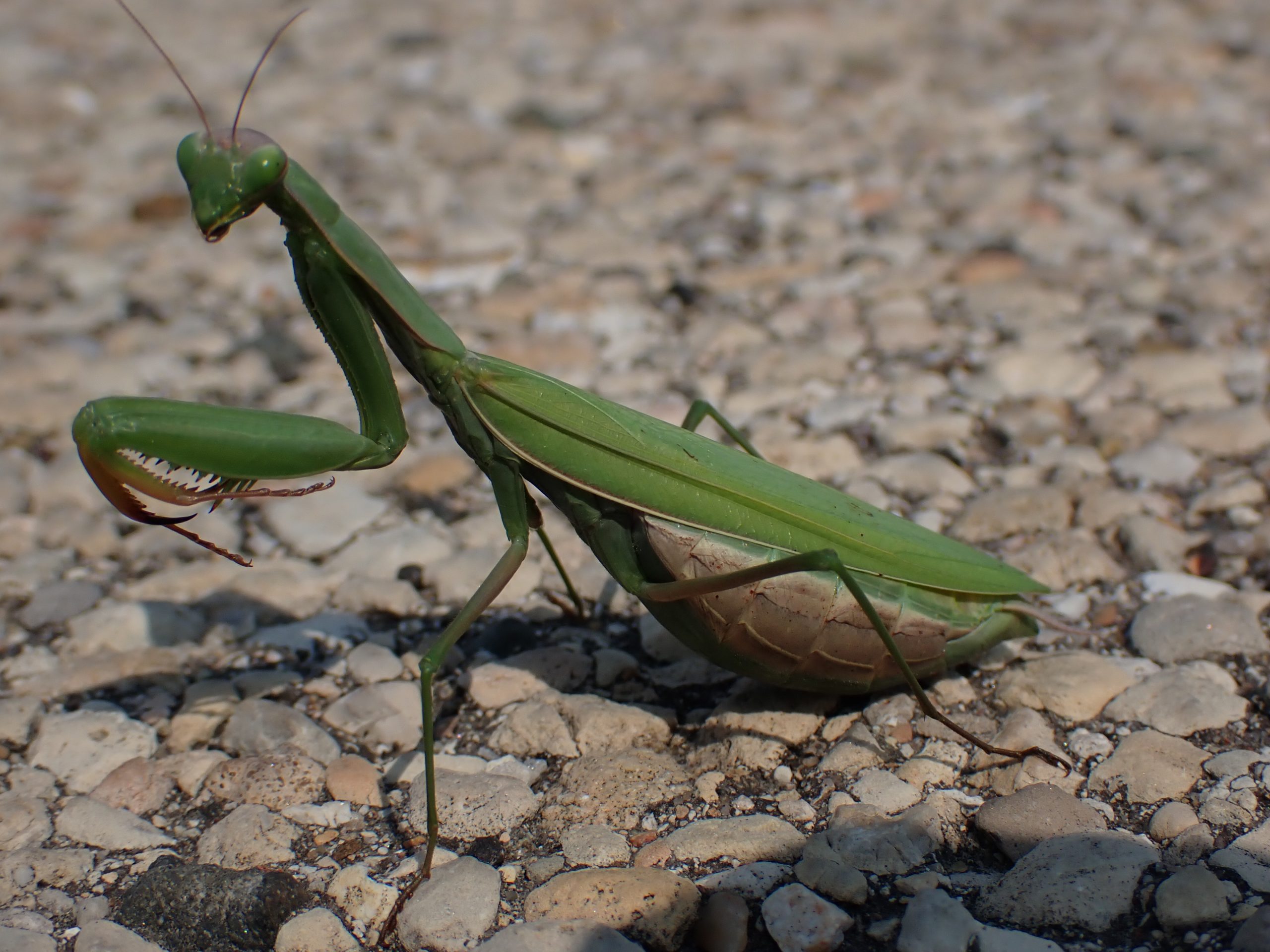 The praying mantis will emerge throughout the daytime.

Praying mantises like staying sedentary at night, and if feasible, in a well-protected area away from predators.

Praying mantises can be helpful for farmers because they eat other insects that are harmful to crops.

However, there are some risks associated with having these bugs around your home.

Praying mantises can be dangerous because they will eat beneficial insects, such as bees and pollinators.

Praying Mantis Are Harmful To Bees And Pollinators

If you have a beekeeping hobby or if the praying mantis near your house is harming your crops, then it might be best to get rid of them.

There are many ways to get rid of praying mantises, including using a vacuum cleaner, catching them in a net, or spraying them with water.

If you’re looking for a more natural way to get rid of the praying mantis, then you can try using essential oils.

How to Get Rid of Praying Mantis Naturally

You can get rid of Praying Mantis in your house naturally by spraying soap and water.

Spray 0.25 gallons of warm water into a spray bottle with 0.05 cups of Dawn dish detergent.

Aim the liquid directly at the praying mantis to kill it, or aim on areas you don’t want them to be around for good measure.

Turmeric is a spice that Praying Mantis do not like and will avoid.

You only need to sprinkle a small amount of this spice around the plants and in the areas where you wish to keep them safe.

Mix two tablespoons of natural turmeric powder with one cup of water, then pour into spray bottle or jar for easy application. You can also sprinkle it on the leaves of your plants.

The strong smell will deter Praying Mantis, and they will eventually move on.

You can get rid of Praying Mantis in your house naturally by spraying nettle purine.

Nettle purine is a basic yet effective nettle repellant. You only need 100 grams of fresh or dried nettles and to add them into one liter boiling water, let it simmer for about 15 minutes then strain the solution.

Pour the nettle juice into a spray bottle while straining it. It’s as simple as spraying the area where you wish to keep the bugs away.

You can purchase cedar oil at most stores that sell pest control supplies or online.

Make sure to shake the bottle well and spray directly on Praying Mantis for best results.

Praying Mantis does not like the smell of lemon juice, so spraying it around your house will help keep them away.

You can either use fresh lemon juice or purchase a bottle of lemon essential oil.

Add 30 drops of lemon essential oil to two cups of water and put into a spray bottle. Shake well before spraying.

Be sure to apply the solution around doorways, windows, and other areas where Praying Mantis are likely to enter the home.

You can get rid of Praying Mantis in your house naturally by spraying a mixture of beer and soap.

Mix two parts water to one part dish detergent, then add the contents from an empty can of cheap beer into it as well. Shake well before using as this repellent will need to be reapplied frequently for best results.

You can get rid of Praying Mantis by spraying near their infested area with bug sprays. Most insecticides will keep Praying Mantis away, but make sure to read the label for instructions on how to use it.

Picking Praying Mantis up and moving them

The most humane way to get rid of Praying Mantis is by picking them up and relocating them.

Make sure you are wearing gloves when doing this, as they may pinch or sting if handled incorrectly. Praying Mantis do not survive well outside their natural habitat as they are fragile and will quickly dehydrate.

The greatest threat to Praying Mantis is birds, especially blue jays. They will prey on Praying Mantis eggs or young mantises in the garden, so it’s best to keep them away.

If you have a garden, praying mantises may not be as bad as they seem.

Although some methods of removing them from your home are effective, if you’re lucky enough to have plants in the yard, these pests can actually help with eating insects that would otherwise damage your flowers and vegetables.

In addition to being a natural insecticide for aphids and other bugs that feed on plant life, they also eat all the dead ones out there too!

So next time one comes up around your house or office space, try trapping it instead of killing it.

BugspestsPraying Mantis
Previous Post Does Alcohol Kill Roaches?
Next Post How To Get Rid Of Mud Dauber Wasps Naturally