Menu
Home > Garden > How to Stop Your Dog From Eating Mulch 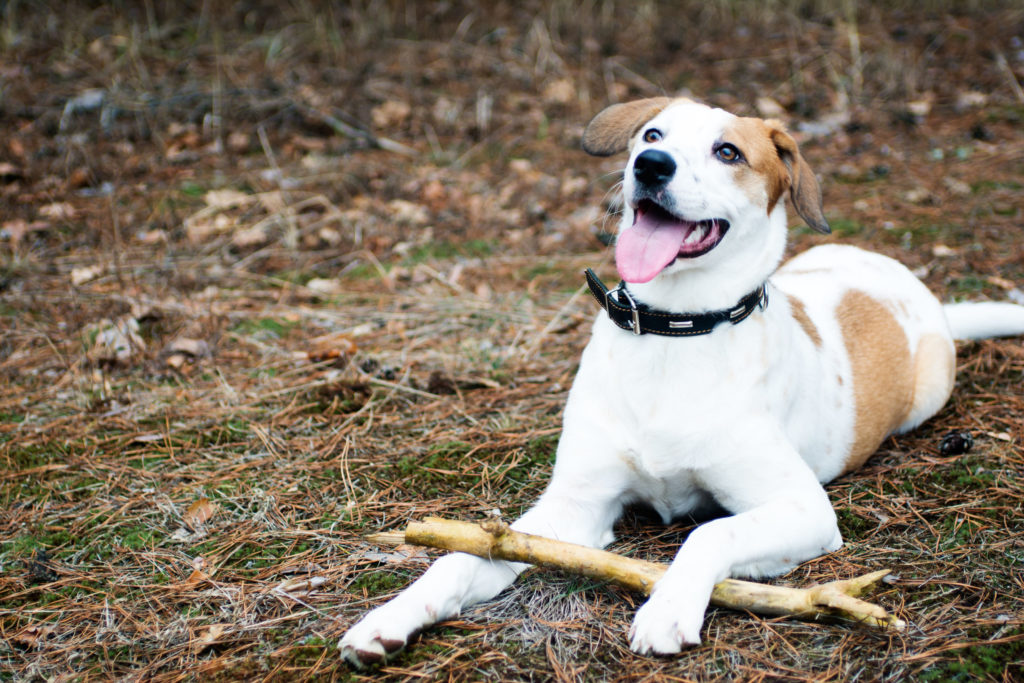 Dogs love to chew on things.

If you’re looking for a strategy to spruce up a section of your yard, mulch is an excellent option.

Your dog’s health might be at risk if he or she eats mulch.

We’ll show you how to keep your dog safe and your yard looking great in this post!

Why Is Eating Mulch So Bad?

Dogs love mulch because it smells, tastes and feels good.

They can be so drawn to mulch that they will eat more than the small amount of food or treats you offered them as a reward for staying away from mulch.

This is why chewing on mulch might not only lead to indigestion but also other problems such as:

The mulch itself is not dangerous, but when swallowed it can become lodged in the dog’s throat or digestive system.

This will cause discomfort and might require surgery to remove the mulch.

Mulch poses other dangers such as being a choking hazard and a mechanical obstruction.

If mulch is eaten in large enough quantities, it can cause other problems such as:

Mulch can create a reaction with the dog’s stomach acids and often leads to vomiting.

This is not life-threatening, but it will be very unpleasant for your pet if they eat mulch on a regular basis instead of just an occasional nibble.

The best way to keep mulch from being a problem for your dog is to make sure they are consuming their own food in the yard when you are not there.

If mulch has been ingested, it is important to get veterinary assistance as soon as possible before any complications set in.

Why Would a Dog Want to Eat Mulch? 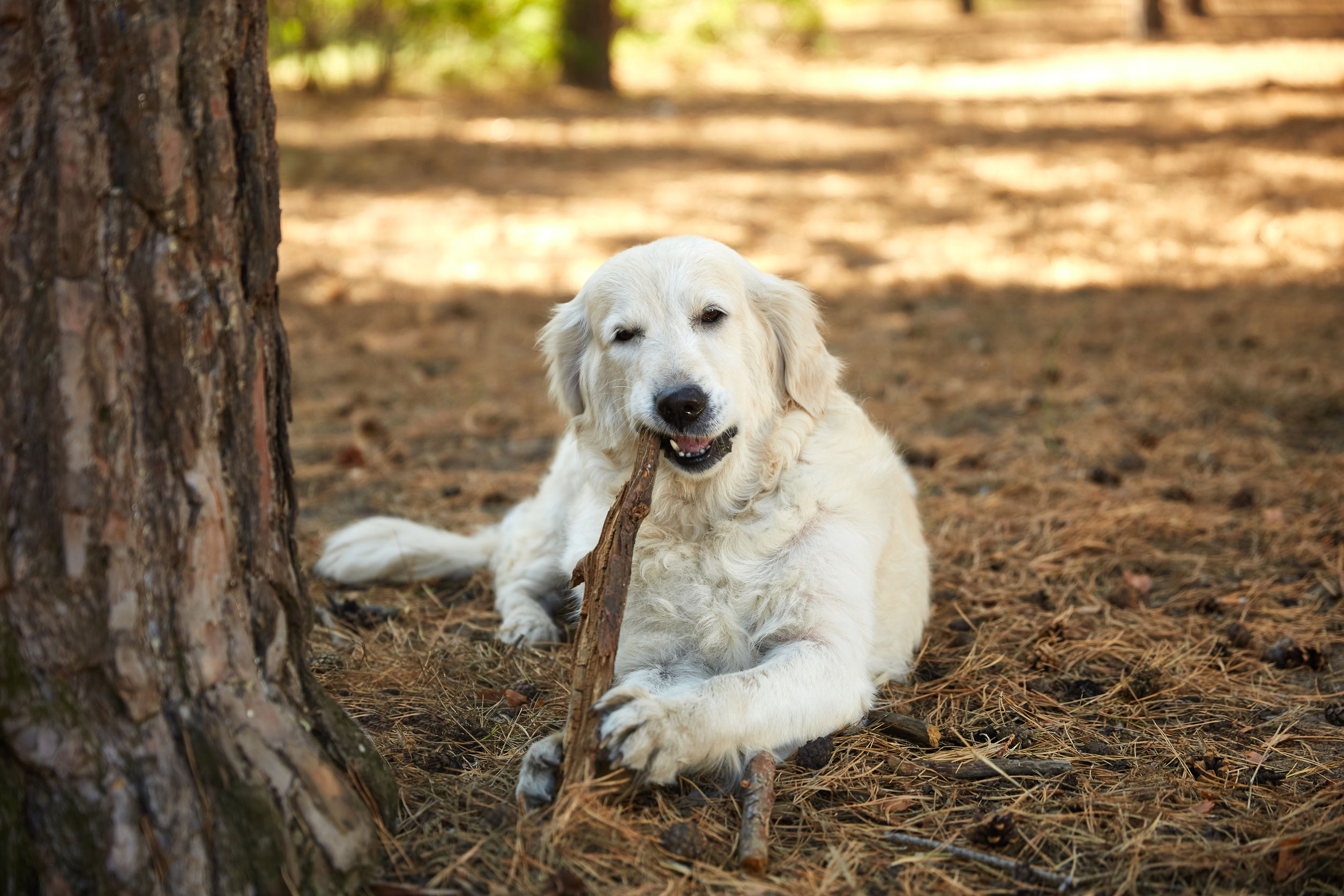 There can be a variety of reasons why a dog might be interested in eating mulch, and determining the underlying cause is essential to resolving the issue. Some potential causes include:

Dogs are natural scavengers and may be attracted to mulch because it smells like food or has remnants of food on it.

Puppies and young dogs are often curious about everything and may be attracted to mulch because it is new and different.

If a dog has a toothache, they may eat mulch as a way to soothe the pain.

A bored dog may resort to eating mulch as a way to entertain themselves.

A stressed dog may resort to eating mulch in order to cope with their stress. Or, a different object within the mulch could be causing them distress.

There are plenty of things that might appear interesting or delicious to a dog when they take a closer look at mulch, so it is important to consider mulch as a potential trigger.

Finally, mulch can be made of many nutritious ingredients that could attract your dog’s interest if they are lacking certain nutrients in their diet.

If you notice any changes in your dog’s eating habits or behavior after coming into contact with mulch, it might be helpful to consult a veterinarian.

Mulch can be made of many nutritious ingredients that could attract your dog’s interest if they are lacking certain nutrients in their diet.

If you notice any changes in your dog’s eating habits or behavior after coming into contact with mulch, it might be helpful to consult a veterinarian.

The Signs and Risks of Consuming Mulch

There are a few clear signs that can indicate your dog has been eating mulch.

If you see your dog excessively licking his or her lips, this could be a sign of gum irritation.

Additionally, if you notice your dog choking, vomiting, or having difficulty breathing after consuming mulch, it is important to take him or her to the vet immediately.

Other clear sign that your dog has eaten mulch is if you notice any kind of blockage.

He or she may also have an upset stomach, diarrhea, and/or constipation after consuming mulch.

Additionally, mulch can contain a number of chemicals such as herbicides and other toxins. If the mulch contains these materials, it can lead to mulch poisoning.

Symptoms of mulch poisoning include:

How to Stop Your Dog From Eating Mulch

There are many dangers that mulch poses to dogs and it is important to keep your dog as far away from mulch as possible.

One way to do this is by exercising your dog more so that it will be too tired to go near the mulch.

You can also use repellent sprays to keep your dog from going near the mulch.

If your dog does get near the mulch, you can distract it by giving it a toy to play with or training it to stay away from dangerous areas.

Ultimately, it is up to dog owners to keep their dogs safe and out of trouble. By being responsible and taking the necessary precautions, you can ensure that your dog will not be harmed by mulch.

Also Read: How to Get Rid of Bugs in Your AeroGarden Naturally

You may move forward with more confidence knowing what you can do to keep your dog safe.

If you’re worried about the safety of your pup, we’ve got some great advice for how to stop them from eating mulch and other wood chips or plant material that they shouldn’t be consuming.

A good place to start is by restricting their access as much as possible so they don’t have a chance at trying it again in the future.

To make sure this behavior doesn’t repeat itself, consider exploring training options like clicker training or desensitizing exercises that help alleviate anxiety and fear around new things (like bark dust)

We hope these ideas will give you peace of mind when caring for your pet!