Menu
Home > Pests > Animals > Possums Vs. Opossums: Know The Difference Between Both Animals 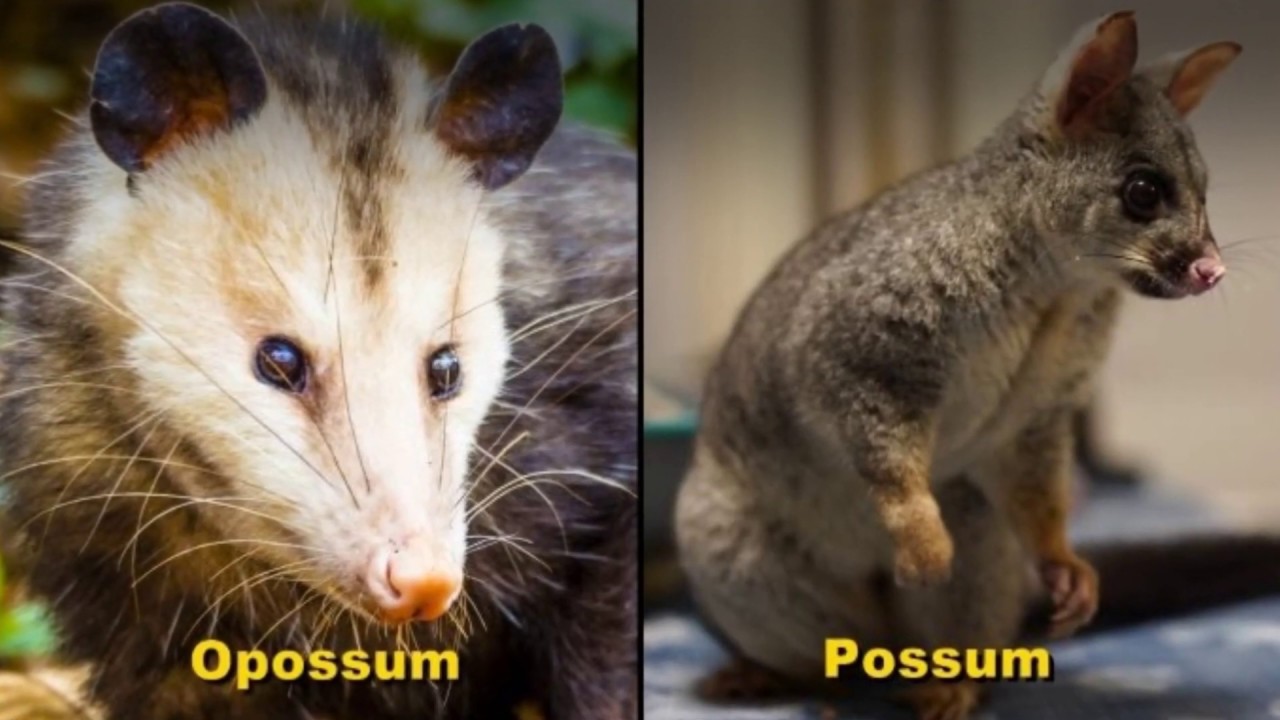 Possums and Opossums are marsupials and are dissimilar animals. Possums live in Australia and other countries while Opossums live in North America. So about Possum or Opossum, it depends on where they live.

The opossums of North America were named for Captain John Smith in the 17th century in Virginia’s Jamestown colony.

The name is derived from Opossum; this is an Algonquian word from Virginia, which means “white beast.” Although both are marsupials, Australian possums are more closely related to kangaroos and are more tender than North American possums.

In contrast, in North America, people call the animals that are prowling their backyard at night possums. Do you want to know more about this topic and know the difference between possums and possums? Below you will find everything you need to know to differentiate them.

Possums that are pronounced with pos are a marsupial that lives in Australia, and there are four color variations: silver-gray, black, brown, and gold. This animal got its name from its resemblance to the possums of America. Sir Joseph Banks, the man who accompanied the great English explorer James Cook, compared them.

He said it bore a strong resemblance to an Opossum tribe animal. Although they are very similar, both animals are different.

The characteristics of the Possum

Australian possums are also called common opossums; they are more like a Chinchilla. Their color is different than possums; they range from a gray like Chinchilla to a silver and gold fox; they can also be black.

Their ears are larger than those of the Virginia opossum; the coat is thicker and softer. The Australian Opossum has the difference of having a bushy tail that is covered in fur. The legs, the snout, and the eyes are very similar, and both eat very similarly.

Both opossums are omnivorous, eating mostly meat and other animal matter such as bird eggs, insects, leaves, flowers, small vertebrates, seeds, and fruits.

This Opossum is a North American marsupial that has a white face and a grayish-white body. After Captain John Smith in the 17th century, he is an English settler from the Jamestown colony.

It is known as the North American Virginia possum. The use of this name was recorded in 1610 as Apossouns. The ears and feet are black; the fur of this Opossum is rough.

They have sharp teeth similar to cats; their tails are bare like rats. Possums are considered ugly and very scary animals. Many people get scared at night when they have to see one in their backyard.

This animal is of the order Didelphimorphia, and its name derives from the word Powhatan; this is a language used by the Virginia Algonquian tribe. As mentioned above, this word means beast or white dog in Powhatan.

This animal eats approximately 5000 ticks per season and also eats other vermin. Although they are very ugly and people are afraid of them, they can keep gardens and patios free of pests. These animals carry a virus that is deadly to horses and young chickens.

Also Read: How To Get Rid Of Green Anoles Naturally

What’s The Difference Between Possum And Opossum?

Possums are diverse in color ranging from gray, gold, brown to black. At the same time, Opossum is grayish-white in color.

The Australian Possum has a bushy and fur-covered tail, while the Opossum has a tail that is bare like a rat.

Possum has a thicker and smoother coat than North American Opossum, coarse fur.

Where Can You Find A Possum?

Possums are native to Australia since the 19th century, although it has spread and reached neighboring nations such as New Zealand, China, New Guinea, and Sulawesi.

These marsupials generally tend to live in wooded areas but can also build small rock dens. Everything will depend on whether the terrain allows the construction of these dens.

They are opportunistic animals and try to benefit from the land that is close to them. Possums are always going to prefer the woods anywhere.

Scientifically speaking, it is challenging for you to find real possums in North America. Whenever they refer to the cute Possum possums, they mean the Australian version. If they talk about opossum possums, you can find them throughout the American continent.

Are Opossums More Dangerous Than Possums?

Australian possums that are more adorable and unafraid of humans do not carry disease. You should not worry about these animals because they will not harm and bite people. Another important aspect of these opossums is that they have a natural resistance that cannot be scientifically explained to rabies.

North American possums also have this resistance and also have other immunities that are more serious. These possums can eat a rattlesnake, which is a very dangerous snake in the United States. They can handle it without a problem as if it were a piece of garbage.

For most people, both animals are ugly vermin that are capable of carrying the disease. They are very mysterious animals that are gifted with a sense of resilience that is inexplicable.

Possums and possums are different cousins.

As you can see, Possums and Opossums are different animals that many people tend to confuse. Depending on where in the world you are, you will use Possum or Opossum.

Everyone in America knows there is a version that is cuter than the ugly night stalker they see. For Australians, their version of Possum is much cuter and cuter. To them, this animal does not resemble the creepy rat-tailed nocturnal of North America.

With this information about the Possums vs. Opossums, you will already know ​​the differences between the two versions. Although they are cousins, ​​you cannot confuse them because they are different animals.