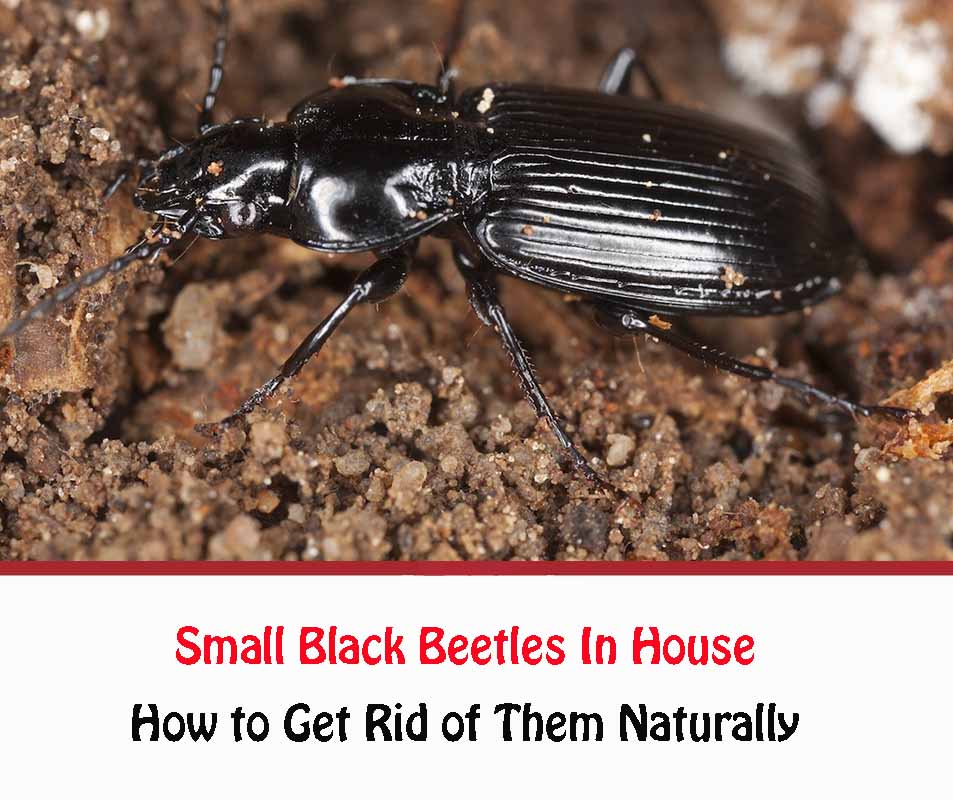 The black beetle is a very unpleasant insect, especially when they enter your home without you noticing. Most insects seek shelter in warm environments during the colder months, so your home will always be the best option. The good news is that there are many ways you can get rid of them.

It is very common to see a wide variety of insects outdoors, but it is very worrying once they begin to be seen inside the home. You can usually find black beetles in your backyard. And since there are several species of them, it is important that you know which ones are harmless.

This type of beetle can become a real pest in your home if you do not manage to get rid of them in time. During their maturation stage, black carpet beetles turn darker or black. In general, the larvae are the most destructive, and to avoid inconvenience, you must get rid of the adults.

The black and red blister beetle is especially found in the southern United States, although it can also be seen in Central America. Compared to the other black beetles, this one has a very small head and a hunchbacked body, much like a tear. Its name is because it has two black and red parts that join in the shape of a wing up to its thorax.

This beetle species can be seen most often in homes, and they are considered pests in the New Zealand and Australia area. African beetles prefer to stay under a tropical climate, and legumes can be named among their favorite food.

Of the different beetle species, these are the ones that have the most unusual colors and look very striking. It is very common to see these beetles in the eastern regions, and they can be recognized due to their very small appearance as they are only 5 mm long.

Cedar beetles are also known as parasitic cicada beetles, and they have a very elongated, shiny black body. These beetles’ abdomen is striking as it is orange, and they prefer warm environments. And during this weather, they can sometimes be mistaken for fireflies.

This beetle is perfectly defined by its name, as it tends to live in furniture structures, especially wooden ones. Their color can be between dark brown and black, and once they enter the home, they can become a headache because they can eat a variety of wooden items and leave them in poor condition.

Although the species of this beetle is large, the reality is that this insect is very harmless. It is characterized by having a horn on its head very similar to that of rhinos, which possibly makes it look like a very threatening beetle. Although it is not used to see them much in the air, these beetles can fly.

This beetle species belongs to the largest and has a large size in its body that manages to stand out between its head and thorax. When upset, this beetle emits a very oily substance that can become poisonous. And getting on your skin can cause blisters, so getting rid of them will be the best thing you can do.

Stink beetles get their name from releasing a strong-smelling substance, which is why it’s also known in some places as the skunk beetle. When they feel threatened, this species of beetles have strange behavior, and it is when they turn upside down to expel this foul-smelling substance.

Cucumber spotted beetles are small garden insects, and they can be easily identified by having yellow streaks or spots. These insects are of the creeping species and are used to feeding on cucumber, legume leaves, squash, and corn.

Weevils belong to the species of small beetles, and it turns out to be a very annoying insect because it has a preference for gardens and can become a pest. To feed, this insect uses its two antennae to smell plants that are nearby. If found in your backyard, these insects could do a lot of damage.

Unlike the other beetles, this one does not have an oval shape on its body, and among its characteristics, it has a case where its wings go, and it opens them only to fly. The feeding of these insects is based on worms that live on rotten meat, and it is for this reason, they emit a very unpleasant smell.

This white-spotted beetle is also recognized by having its long antennae as well as its horns. They prefer forests, and it is common to see them in parts of North America.

These types of beetles are from flowers, and among their characteristics, it can be noted that they have an oval body of glossy black color. A very unpleasant smell comes from these insects, and they can be recognized with the naked eye by having a dimple in their thorax. On the contrary, these insects are not dangerous; they are very beneficial because they feed on decaying wood. 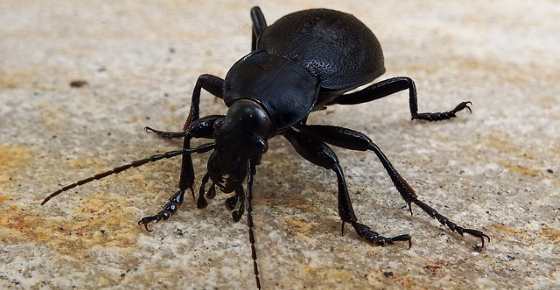 How To Get Rid Of Small Black Beetle In House Naturally

To get rid of beetles in a very easy and natural way, you can use:

This product is deadly for insects that have an exoskeleton, and after 48 hours, these insects come to touch diatomaceous earth and die from dehydration.

Peppermint oil has a very pleasant smell that most people like, but it can repel insects quickly.

In the market, you can get sticky traps that do not have poison, and apart from using them with beetles, you can use them with other insects.

This oil has the power to kill more than 200 species of insects, and you can spray it in those areas where you have noticed the presence of beetles.

Where Do Small Black Beetles Nest?

As we mentioned in our blog, black beetles love wood chips, pine straw, thatch, and mulch under which they are able to create the secure nests. And these nests are going to protect them from the components. However, excessive rainfall, cold, and heat will drive them to find better shelter. And in the autumn, black beetles are going to forage for food from their nest to far more accommodating locations. And the residential houses are ideal winter getaways for hibernating small black beetles.

What causes small black beetle bugs in your home?

Carpet beetles are typical in houses, though seldom in numbers, so they do not usually attract people’s attention. And carpet beetles feed on similar products and carpets and reproduce slowly. Then, carpet beetles have the uncommon power to feed and digest the structural proteins, keratin in human hair or animal skin, and fur.

What exactly are these small black insects in your bed?

And black carpet beetles have glossy black bodies and murky legs. Unlike bed bugs, they’ve wings. And carpet beetles are drawn to the flowers and feed on nectar and pollen. Though they don’t attack humans, their bristly hair could cause an allergic reaction in several individuals.

What exactly are these small black bugs in your kitchen?

Pantry bugs are insects ordinarily discovered in the cooking area, kitchens, and food cabinets. These pantry insects feast on and contaminate saved food products, therefore making them harmful for human health. They are able to be often discovered crawling and flying around the home after they can have infested food.

What exactly are these small bugs in your home?

Fungus gnats are tiny flying insects ordinarily found inside, hovering around houseplants. And they often lay their eggs in potting soil or damp natural debris, feeding on the plants’ roots. When you find fungus gnats in the home of yours, do not be worried. Fungus gnats don’t result in structural damage, eat the leaves of plants, or even bite.

Bugspests
Previous Post Can Dogs Get Lice from People?
Next Post How To Get Rid Of Tiny Black Flying Bugs In House Naturally