Cockroaches are scary. They are integral to the ecosystem. Their common predators include amphibians, beetles, centipedes, birds, snakes, insects, and reptiles. They are a protein source. Some insects too eat cockroaches. Cockroaches are incredibly tough creatures; however, they serve as a perfect snack for some animals. Many of them die due to natural causes, while others end up becoming a meal for their natural predators.

A few parasitic wasps also feed on these cockroaches. They even lay eggs inside cockroaches’ egg cases. Some fungi release lethal spores that attach to this insect. A cockroach affected by them can transfer the condition to other hosts.

Cockroaches that die of old age feed many hungry creatures, leading to pest problems for house owners. Beetles, silverfish as well as other roaches eat up cockroaches inside the house. Food, water, and safety are few reasons why these creatures infest houses.

Below we discuss some animals that eat cockroaches:

You will find frogs in the US, mostly throughout North America, especially in cold places. They are common here than toads. Two common frog species include Northern Leopard Frog and Spring Peeper. They eat cockroaches, as well as bugs and insects. Spring Peeper lives in grassy and woodland areas. They are nocturnal and have dull brown color, which is suitable for camouflage. These creatures are 1 inch, and they feed on cockroaches, other little bugs, and beetles.

Lizards are reptiles, which have a long body, small head, and tail. While some have eyelids and can blink, most others do not. They use their tongues to smell, and their skin is scaly. These creatures exist everywhere and, however, not in Antarctica. Lizard’s favorite food includes cockroaches, insects, and other bugs. Humans keep two types of lizards as pets, which are geckos and iguanas.

Toads are a common enemy of these cockroaches. They may gulp down many cockroaches at one go. These toads exist everywhere, including barren desserts. They are dull brown or grey. Some are red with darker spots. American toads that exist in your backyard and other areas for water and shelter feed on cockroaches. If you need to eliminate cockroach infestation in your house, you can bring in some toads in the area.

Beetles are predators that hunt down and feed on insects either for themselves or the larvae. They help to control the bug population that can harm the ecosystem in the US. They also control bugs that are a nuisance,, such as cockroaches. It isn’t recommended to release beetles in the home; however you can have them in your garden to get rid of cockroaches and aphids.

Opossums are natives of North America and are Omnivores. Their diet is distasteful. They feed on roadkill, cockroaches, garbage, and worms. These creatures are ugly. Opossums destroy cockroaches, but humans fear them for spreading rabies.

You will rarely see birds eating cockroaches. However, they do eat sometimes. Most cockroaches are nowhere in sight of these birds. They may exist inside a home in bathrooms and kitchens or dark, moist, and warm areas. Birds, however find some migratory cockroaches or some of them near sewers. Moreover, cockroaches can be harmful to these birds that consume them as they live in unhealthy environments.

Rats and mice eat cockroaches too. They eat them even when they are laid in traps, without getting caught up in those traps. They leave behind the head, legs, and antenna of these cockroaches and avoid eating these parts. They may feed on its exoskeleton or sometimes just the abdomen’s soft viscera.

Housepets such as cats and dogs eat cockroaches. They may also just chase them for fun sometimes. What cats enjoy is hunting and preying on insects. Cats need protein sources, too, so they have mice, birds, rats, and cockroaches for their meal. Dogs hunt for insects and sometimes do eat these cockroaches. Eating these cockroaches could harm the health of these pets in case they carry any diseases or came in contact with insecticides.

Cockroaches also fear other predators, such as parasitic wasps that target them and lay eggs inside their egg cases. Fungi also harm them by releasing spores that attach to them. Affected cockroaches transfer their condition to hosts. Spiders and some ants that make contact in confined areas also eat cockroaches. Cockroaches being faster than these ants, escape their attack. They may soon become prey when outnumbered and trapped by many of these surrounding ants. Mite, centipedes, and roundworms also feed on cockroaches. Beetles, silverfish, and other cockroaches also consume these cockroaches inside homes. These cockroaches also eat up each other when they find no or little food for a long while. However, they only eat weaker ones that are unable to survive.

Also Read: How Do Cockroaches Reproduce?

Why Do These Animals Eat Cockroaches? 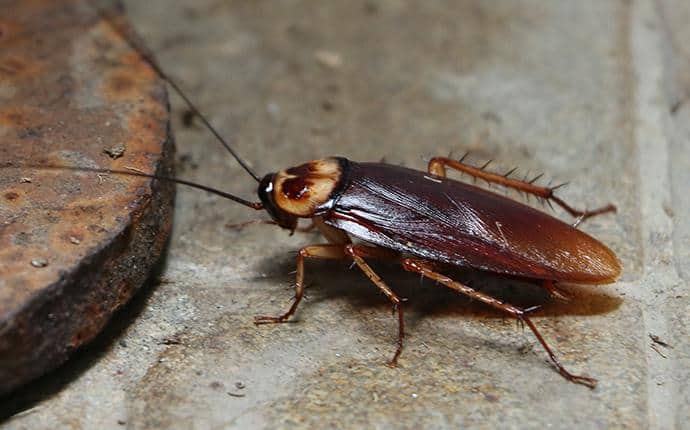 Eating these creatures turns out to be beneficial for mankind as they get rid of this unwanted species, which are a huge nuisance. The ecosystem and natural habitat are livelier and thriving without them. No cockroach problem can get uncontrollable. The cockroach population is also under control as these predators eat both adult cockroaches as well as their larvae. There is an additional advantage for predators, which can receive lots of protein from eating these cockroaches that these roaches gather from waste and decaying matter. However, most predators never get the required levels of protein and need to eat numerous cockroaches or vary their diet for requisite nutrition.

Cockroachespests
Previous Post How To Get Rid Of Chinch Bugs Naturally
Next Post What Is the Difference Between Centipedes and Millipedes?