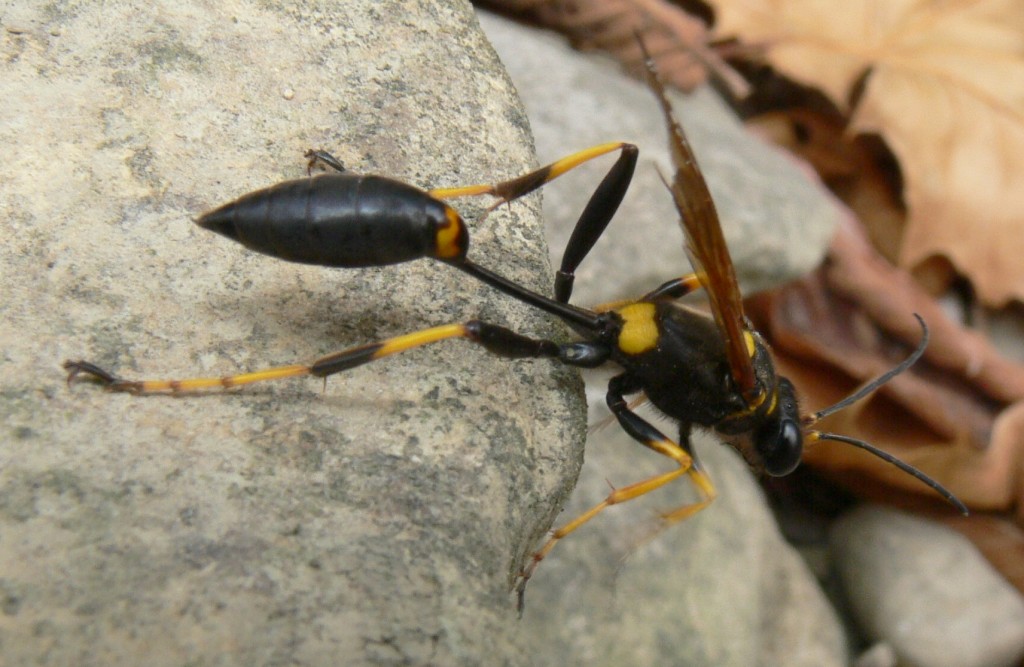 Mud wasps are usually black or black with orange, but you can find them in various colors and sizes. They are distinguished from other insects by the shape of their abdomen, which is thin. For this reason, some scientists call them thread waist wasps.

They are also known as soil daubers, potter wasps, organ wasps, etc. They are usually ½ to 1 inch long. The female mud wasps are the ones that have stingers and are found in the same place where the ovipositor has them.

You can see them in your garden or patio drinking water or feeding on nectar even if they do not have a nest in your home. Females only build their nests out of clay or mud and emit a high-pitched hum when working in the nest.

What do Mud Wasps Eat?

They are called mud wasps because they build their nests with mud and are omnivorous. They can eat nectar from floats, insects, and spiders (especially black widows).

The Life Cycle of Mud Wasps

When you hear a loud buzz in your yard or find a hornet nest attached to your house, shed, or under your eaves, they are usually mud wasps. They can appear in hot climates in late spring and summer.

They are most active in the day and maybe closer to puddles where they can collect mud. There are more communions in the United States, Mexico, and Canada.

The life cycle of mud wasps from egg to adulthood is one year. The eggs are planted in the cells of the mud nest and hatch after a few days. After the larvae eat the spider left by the female wasps and then turn into a cocoon, there it remains for three weeks before leaving the nest as an adult wasp. 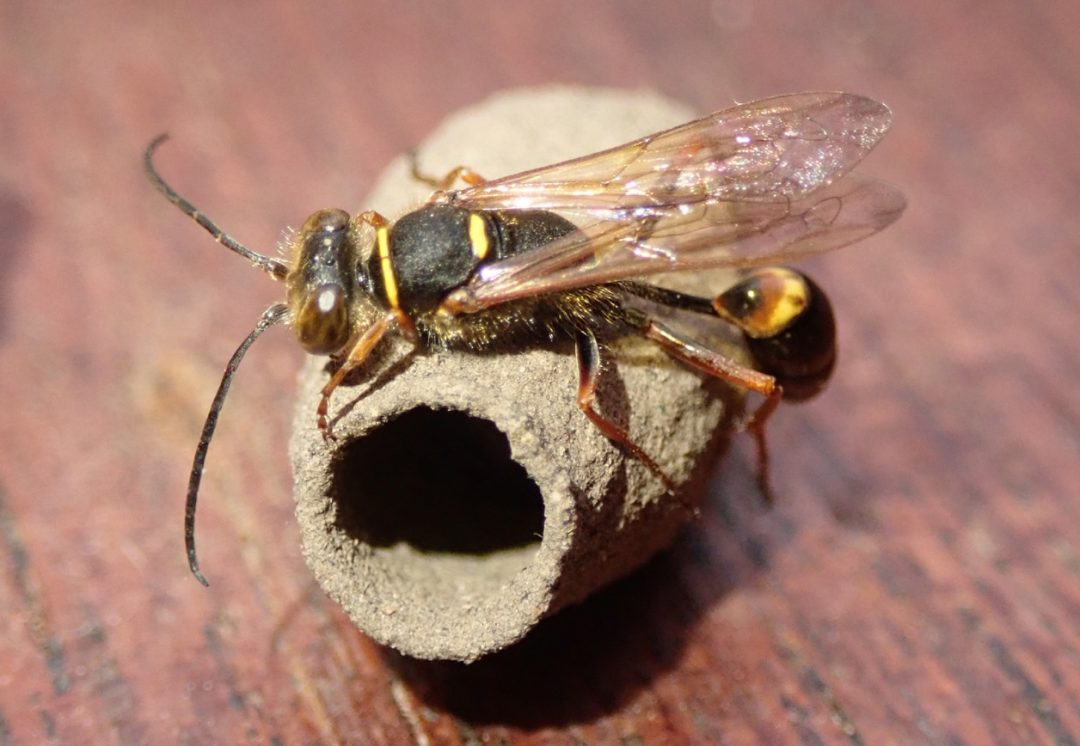 Mud wasps are harmless insects and can be beneficial. As mentioned above, they feed on spiders, especially black widows, which are their favorite prey. They can have up to 30 spiders in each cell in the nest; with between 15 and 20 cells per nest, they can eat up to 500 spiders.

For people who fear spiders, it is very beneficial to have mud wasps near their homes.

Do Mud Daubers Cause Damage?

They differ from the other types of wasps because they do not live in colonies, are not aggressive, and do not defend their nests, although mud daubers can sting if they feel threatened. Mud wasps are not aggressive and do not attack humans. They use the venom to paralyze their prey.

What Do Mud Wasps Attract?

Mud daubers are attracted to insects, spiders, flower nectar, and sweet things. You can keep them away by killing spiders near your home and avoiding aromatic substances on the ground.

Mud wasps or mud daubers use their stingers to paralyze spiders and rarely sting humans. When they attack or destroy their nests, the mud wasps prefer to leave and move on to build another nest. When they bite, it is for self-defense.

How Painful is a Mud Sting?

When mud wasps sting, it is to defend themselves, and the sting is painful, but it is milder than bee stings. People who are allergic to wasp venom should go to the doctor and feel more pain.

What is the Difference Between a Wasp and a Mud Wasp?

Mud wasps are similar in size and body shape to wasps. But there are some notable differences that you need to know to differentiate them. Mud wasps are usually larger, and their bodies are slimmer than wasps.

Wasps typically have yellow stripes along their body, while mud wasps may have a pair of yellow stripes. Another difference is the color. Although both can be black, the mud daubers have a more subdued color.

Where do Mud Daubers Sleep?

Although it seems strange, mud wasps do not spend the night in their nests. Although they usually spend a lot of time in their nests, they fly to the bushes or nearby structures to sleep at night.

Do Mud Daubers Reuse Their Nests?

Most mud wasps make new nests for each generation. But some species can reuse old mud nests that other mud wasps have built.

The adult female wasps begin to build their nests, and when ready, they begin to search for spiders or insects to place in each cell within the nest. They build nests by collecting drops of mud from a nearby place with their jaws.

These wasps are known for the characteristic shape of their nests because they do not have combs. They look like pipes and can have multiple chambers, each with a single hole.

Also Read: Where do Wasps Go in Winter?

How to Get Rid of the Mud Wasps Naturally 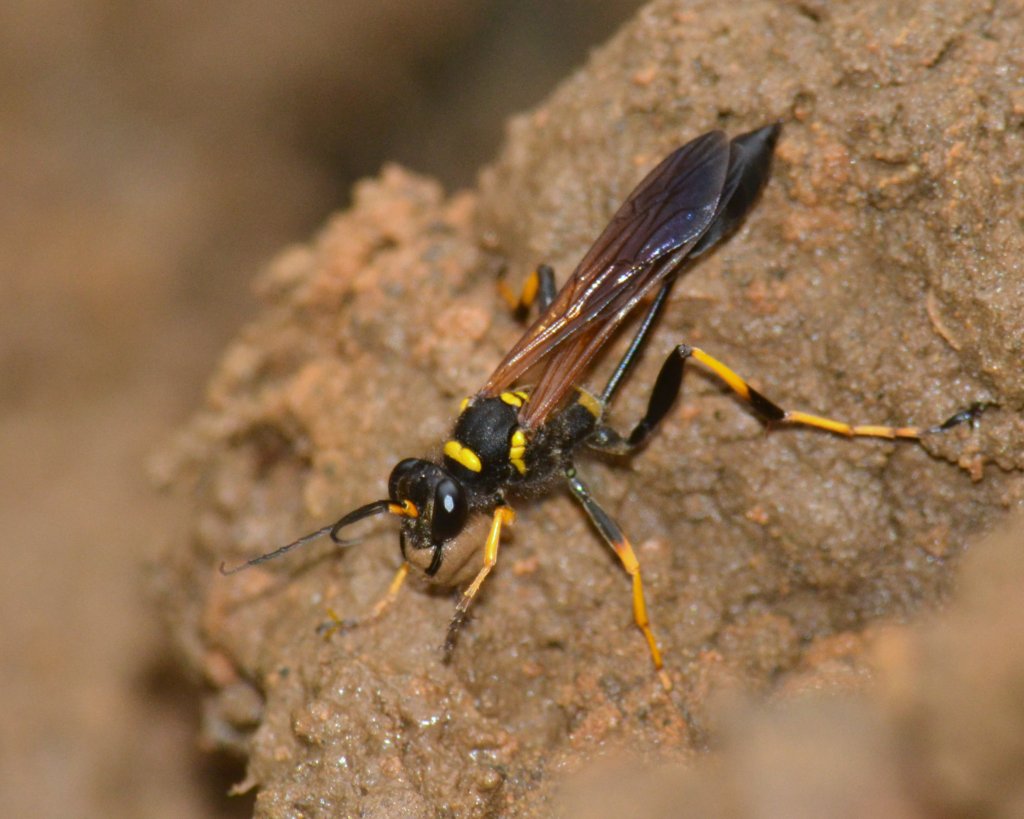 Although mud wasps are not dangerous to humans, they can be annoying when you feel them flying in your yard or garden. When you decide to get rid of them, you should identify that the location is not a nuisance to other neighbors. To get rid of mud wasps, you can use the following tips:

You can start removing their nests by spraying them with a wasp freezer. This will ensure that the wasps inside the nest will die and not attack you when you remove the nest.

Use a paint scraper to remove the nest, you may notice neutralized spiders inside the nest, but they will not harm them.

Then you must dispose of the nest and its contents in a bag, spray the area with water to clean and remove any debris that may remain.

Getting rid of the food source will help keep these muddy sightings away because they will go elsewhere searching for food. Use spider repellants and remove all cobwebs.

Another way to get rid of mud wasps is to relocate the nest. You can do it at night because the wasps will be asleep. Remember always to wear protective gear.

Magpies, starlings, and blackbirds are birds that love to eat wasps. You can attract them to your home by using some great bird feeders and baths.

To get rid of mud wasps, you can use peppermint oil. Put a tablespoon of peppermint oil in a spray bottle and dilute it with water. Spray the mixture in the areas where you want to keep the mud daubers away. The peppermint extract has a strong odor that these insects do not like and will drive them away.

With any of these tips, you can effectively get rid of mud wasps.