Menu
Home > Pests > Birds > What Does It Mean When Crows Gather Around Your House? 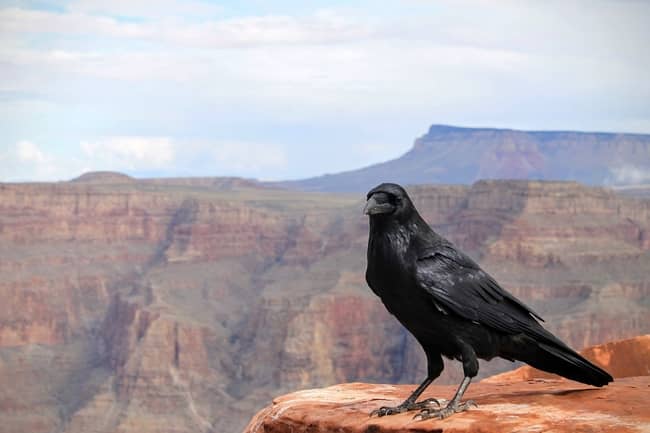 Crows are known to have a multitude of meanings.

What does it mean when they gather around your house? Crows are typically associated with magic, so if you see them near your home there may be something bad about to happen.

They might also want to send you a message that they’ll only tell you by counting the number of crows in the area.

What is their message? What will they say? Only time can tell.

The Meaning of The Crows Around Your House

The crows around your house is a sign. Crows are very intelligent birds and they can understand when something bad will happen to someone in the area.

Crows use their ability of foresight for self-benefit – it’s like them saying, “I’m leaving because this place isn’t safe.”

Or maybe crows gather around your house because you have something they want.

Crows are scavengers and they will eat anything – including the food that’s in your trash can.

If you have a lot of crows around your house, it might be time to clean up your yard and get rid of any possible food sources.

If you see only one black crow flying over your house, it is a sign of bad luck and impending disaster.

Two of something denotes luck.

A positive omen is indicated by the presence of three black crows.

Good fortune, wealth, and abundance are said to come to those who live near the cawing of four crows.

When there are five, on the other hand, it portends terrible health.

There is a high probability of a burglary or theft if you see six crows flying in formation.

In numerology, the number seven generally signifies a need to relocate.

If you have eight crows in your yard, expect sadness.

Why Crows May Gather Around Your House?

Here are some reasons that may explain why a gang of black crows could congregate outside your home.

Crows are one of the most intellectual birds, and they can recall human features and retain grudges for up to two years.

Crows pay their final goodbyes to a deceased crow by gathering around it in a funeral-like fashion called “cacophonous aggregations.” Crows may mob, or attack a person who has hurt one of their own.

Crows flock to the tops of tall trees in order to keep watch for predators and other dangers that could pose a threat to them.

Crows also take flight from these areas when they spot an unknown predator.

Crows are attracted to water sources, as they need to drink often.

Crows are also able to identify food sources that are currently available by observing other animals and humans. Crows will follow people who are carrying food in order to scavenge for scraps.

When crows gather around your house, it’s important to be aware of why they are there.

Crows can be very beneficial in their role as scavengers, but they are also known to attack people when threatened.

Why do crows gather and caw?

There are several reasons why crows might gather in one place.

Crows may crow incessantly if they perceive a threat in the vicinity or when they spot food that belongs to them.

Mobbing is another common behavior of these birds, which includes gathering around potential predators and even chasing away hawks.

Cawing can also be used as a form of communication.

Crows have a good memory for faces, which is a testament to their sharp intellect.

When crows gather and observe the same area or spot in large numbers, it’s important that you pay attention to what they’re doing there.

Cawing nonstop may evoke certain folkloric associations as well like bad omens of death or danger.

Although their behavior may be seen as a nuisance, it’s always important to remember that crows are wild animals and should never be approached.

Also Read: How to Get Rid of Mockingbirds Naturally

How to Scare The Crows Away?

You can’t just rely on one method to get rid of crows. If a large group of crows has been around your home for a long time, it will be tough for you to get them to go. To achieve the best outcomes, you may need to employ a variety of methods:

This is an easy and effective way to keep birds away.

This will scare the crows away and make them think there is danger in the area.

Crows don’t like shiny objects, so decorating your yard with reflective materials may help to deter them.

Decorate with Owl and Snake Decoys.

Crows are often afraid of these animals, so they won’t want to be around your home if you have them out in the yard.

Use a Combination of Methods.

If crows come back after performing one or two methods, double up and try another method too! These pests can be persistent, but there are many ways to keep them away.

Crows aren’t the only pest around your home, so try to control other pests too!

This way you can protect yourself from all sorts of intruders.

If you’re not a fan of birds, it might be time to learn more about what these crows are saying.

Crows have been associated with many superstitions throughout history and across cultures.

Some people believe that if they see the crow’s gathering around one house in particular, this means someone inside is going to die soon.

As always, we recommend doing your own research before adopting any old wives tales as fact.

BirdsCrowspests
Previous Post How to Get Rid of Bugs on Orchids Naturally
Next Post Does Soapy Water Kill Roaches?